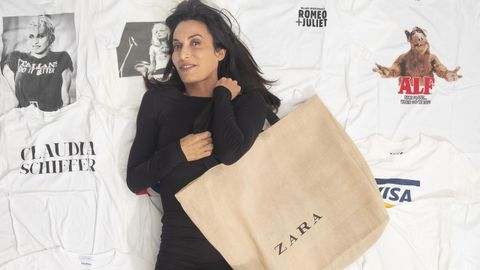 In the picture, Sara Vázquez, head of Trends at Euro Prosem, with the shopping bag the company created for Zara made of yucca. KINOGRAFÍAS 2021.

The company has headquarters ar Burela and a branch at Ames, near Santiago

Among the huge list of suppliers Inditex Group works with, it’s time to talk about talent from A Mariña. Euro Prosem, family business with its headquarters at Burela and a branch at Milladoiro (Ames) –the former focused on the financial and accountable side and the latter, on design, quality and management–, belongs to the large business network working for all Inditex brands, except Uterqüe, they are also suppliers of other big retailers such as El Corte Inglés, Mango, Purificación García, Primark, etc. The link with Amancio Ortega’s empire comes from the design and textile manufacture stages, not only garments, but also complements. Even though today we talk about Zara’s icon, its shopping bag, since Euro Prosem is one of the names behind this project, born a few years ago, as commented by the Chief Executive Martín Vázquez. Next to him, in the company established in 1995, is his father Aniceto Vázquez, General Manager; his mother, Isabel Baño, shareholder; and his sister Sara Vázquez, head of Trends.

This bag is clearly a strong and direct visual reference of the brand, inside and outside the store. A product that was initially dedicated to shopping, that is, to do the shopping in stores. Later, due to its success among clients, it was sold as a product in franchises worldwide. Today it is not manufactured by Euro Prosem, points out Martín Vázquez, but he states the company was in the first creative and productive stages after some period, besides with an already “eco” philosophy that keeps growing these days: “As we had already manufactured bags for Inditex, they told us to develop something”. The research process of products, qualities, and techniques lasted half a year and “complex” remembers, launching a series of “proposals” to be studied but a central idea “until reaching a product that they liked a lot and that was cooked in Accessories Department”, explains. “They were so fond of it that they didn’t want to order a few for just one store, they put me across directly with General Services, though, so that the bag had more presence within Inditex Group. It was so, indeed, they even set it as the image with the corporative brand so that people entering the store could have them at hand and do shopping. And those were in such high demand that, they thought to put them on sale to take them away”.

The origin of the main material is plant-based: the yucca. And cotton on its handle. “We did the R&D and the first productions, almost the first two years. But now, since the volume is overwhelming, they decided to manufacture them with other suppliers”, states Vázquez. For the company of Burela it has been, recognizes, all a satisfaction “because that idea of the rustic and recycled that has become so popular after that, was an inspiration for other brands, to make a similar bag and with its corporative image”.

Working with yucca was “complex”, says, but at the end the process was “very interesting because it mixed the creative aspect with technique knowledge, and that cannot be done by any supplier dedicated to design only. Experience and practice are needed”. They also design other bags for Inditex, “which were implemented to be sold in stores, “with Disney’s characters and logos, same as we do with T-Shirts”, adds. “We’re constantly involved in relevant projects, strictly confidential”, concludes. Some previous works Euro Prosem was at the forefront were the first fashion collection of McDonald’s for Zara or when Coca-Cola y Pepsi lived in harmony in stores.